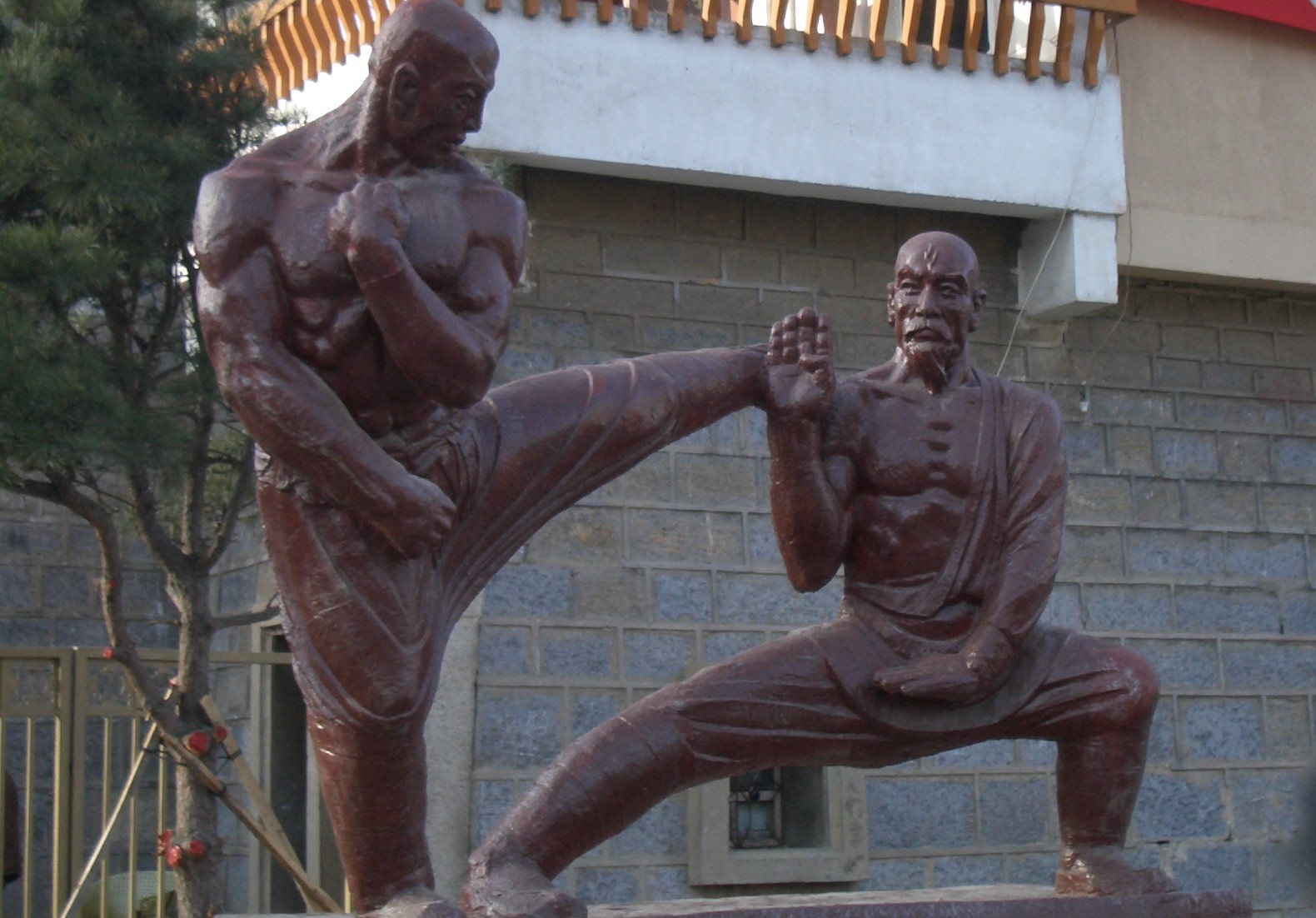 The word ‘Gongfu’ (Kung Fu) has become synonymous with Chinese martial martial arts, but really it refers to any skill which is the result of energy (or effort) over time, and this can be similarly applied by an archer with his bow, or a chef with his cleaver. No matter how hard we may work on a daily basis, we cannot possess gongfu after only a few weeks, or months, as time is a necessary component, in the same way it takes a good stew a long time to cook, in order for the flavors of the ingredients to combine and become something exceptional. And, decades alone without steady effort will not yield good gongfu either, as the effect is cumulative. So, an individual having practiced for ten, twenty, or even thirty (!) years, with only sporadic practice will not possess true internal skill, for “practice”, as the saying goes, “is like rowing in a boat upstream”, which means if you miss one day you end up going backwards. A student with knowledge of the form, but without internal gongfu is considered to possess ‘hollow’ or ’empty’ form. There are no secrets, only (correct) practice.

As ‘gongfu’ is a very generic term, when we are discussing martial arts, the proper term is ‘wushu gongfu’ and, as there are thousands of styles we also need to be more specific and reference the particular style, such as Tiger Claw Gongfu, Praying Mantis Gongfu, and even Taiji Gongfu. It is believed that most Chinese martial arts, and many others throughout the world, have their roots within Shaolin Temple (or Shaolin Temple Gongfu). Shaolin Gongfu is a Buddhist skill that covered many styles, including the twelve animals. The Shaolin monks were recognized as true martial art heroes, known for being formidably skilled and fearless fighters, who trained their bodies to the physical extremes of strength, conditioning and agility, and trained their mind and spirit, through overcoming pain and hardship.

Today, through the worldwide touring shows, Shaolin Gongfu has become known for its dizzying aerial displays and superhuman feats, and has become regarded more as a circus sideshow by the general public. But, this has little bearing on the true purpose and essence of traditional wushu gongfu, which was never intended for theatrical performance or entertainment, and it was never intended as a means of self-glorification, chasing medals and trophies through competition in free fighting and/ or forms. In fact, the ancestors of traditional martial arts systems that tabulated their ‘Wu De’ (martial ethics) centuries ago were very clear about refraining from exhibiting the skill indiscriminately, and not using it to gain power and status, only using the skill to help the weak and oppressed or those in peril. In other words, it was trained for the good of society, or humanity. Once a skill becomes trained for inferior or selfish purposes, honor, integrity, loyalty, and compassion (the very cornerstones upon which it is founded) all become trite and irrelevant, and the skill ultimately becomes worthless as a ‘human skill’. Wing Chun grandmaster Ip Man and Taijiquan grandmaster Chen Fa Ke were as renowned for their dignity, humility, and compassion (their ‘human skills’) as much as their awesome (in the truest sense of the word) combat skills. They even saved their opponents’ losing face’ in defeat. How many martial artists today are that modest?

‘Contemporary’ wushu’, the kind you will see in demonstrations and competitions, is quite different from the traditional combat systems, and far from practical in actual combat. Acrobatic leaps, flying high side sicks, and landing in the splits are ideal for the movies and stage, but are highly risky techniques in real-life situations. And, while contemporary wushu develops fitness and agility, it does not include the internal training (Qigong) for health found within traditional gongfu, so the vast amounts of energy expended are not readily replaced (using up prenatal energy), which leads to premature aging. Therefore, ultimately, the contemporary wushu performer is no different or better off than the professional gymnast, dancer, athlete or cage fighter, prone to injury, long-term back, neck, shoulder, and hip problems and joint pain, or arthritis, without any knowledge of self-healing. There is a saying, “Training in martial arts without internal training will amount to naught”, which basically means that we may develop powerful punches and kicks when we are young, but as we become older we will lose everything, since we lose our speed, strength, and power over time, as well as precious health! A master of traditional gongfu would be able to continue practicing well into his (or her) ‘autumn years’, as the internal training cultivates Qi and vitiality, prevents disease and premature aging, and prolongs life.

The Shaolin fighting monks trained so hard for their martial arts, and ‘tasted bitter’ far beyond what the majority of students are prepared to do, or can even imagine, and most never actually needed to use their fighting skills in need of defense of their temple or country. So then, what exactly was the ultimate point of their gongfu? It is vehicle for spiritual training and transformation (internal alchemy). In the absence of a real-life adversary, the enemy to overcome becomes the self: the blockages that prevent us from developing our full potential as human beings – laziness/ complacency, pride/ arrogance, selfishness, and ignorance, or physical handicaps. The monks also used their internal training to keep themselves healthy and extend their lifespans, so they would have more Qi and time available (in good health) to be able to devote to their Buddhist studies, on the path to attaining Enlightenment. An early demise would certainly hamper success in this endeavor.

Achieving real success with martial gongfu requires ‘Eating Bitter’. Every genuine master has tasted this (just like any accomplished athlete or dancer), and it is simply not possible to attain high levels without it. To ‘Eat Bitter’ basically means to accept hardship, and overcome the physical and mental pain needed to progress, training physically to the point of exhaustion, in all weathers, and throughout the difficult testing times in life, and in certain cases (perhaps against better judgement or medical advice) even training through injury, as well as psychologically possessing the ability to accept criticism (from the teacher). We can ‘taste bitter’ through Horse Stance (Ma Bu), Standing Pole (Zhan Zhuang), Siu Lim Tao (Wing Chun’s first form), intense repeated form practice, and the increasing levels of Hard Qigong, as well as training applications (such as Qin Na/ joint-locking) that can hurt. The question is how much of it and how long can you endure? The more we can accept the stronger we become. In seeking and finding too much comfort and ease we become more apathetic and weaker physically, mentally, and in spirit. It seriously helps if you can actually enjoy the training and can see the point of it and the end results. It is through ‘eating bitter’ that you eventually get to taste the sweet – the rewards and fruits of your labor.

Proper gongfu develops Bone Qi, the true source of strength, power, and health. We cannot truly have a strong body with weak bones! That would be like a big, strong tree possessing spindly roots. Gongfu is ‘Life and Character Training’, which equips us to deal better with “the slings and arrows of outrageous fortune”. Ultimately, while traditional wushu’s primary aim lies in combat proficiency for defense of self, family, and country, and health, strength, vitality, fortitude, spirit, and inner peace are all wonderful and amazing by-products of the practice or gongfu, the essence, true meaning and beauty of the skill lies in self-knowledge and discovery, self-mastery, transformation, to becoming a better, fully realized (or ‘enlightened’) human being. Those martial artists that merely train fighting for fighting’s sake are ultimately missing the point, and the opportunity to become something far, far greater!